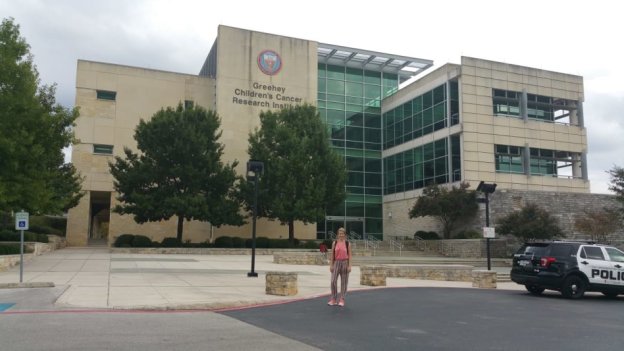 "It was especially important to me to be given the opportunity to have this experience, both the academic and the social aspect, in a foreign country. I want to express my sincere thanks to the DAAD-Stiftung and Dr. Knapp for providing this excellent opportunity and for the wonderful support that made this experience possible."

Christina Stengl is from Germany. Thanks to the generous support of Dr. Wolfgang Knapp and the DAAD-Stiftung she was awarded a scholarship which allowed her to complete an internship in the USA .

Here she relates her experiences:

San Antonio, in the heart of Texas. A city that gave me not only cultural opportunities and experiences, but also mainly a placement at the Children’s Cancer Research Institute. My research topic was glioblastoma (a very malignant tumour); more precisely, I worked with the newly discovered RNA binding protein SERBP1. Under the assumption that SERBP1 directly or indirectly interacts with mTOR (mTOR is the name of proteins which is present in all mammals and indirectly binds itself to the immunosuppressant Rapamycin), we set out to use molecular-biological methods to find out what effect mTOR inhibitors have on the SERBP1 concentration in glioblastoma cell lines and whether the SERBP1 content of a cell can therefore impact the therapeutic effect. But my life in the USA went far beyond this research. I had the opportunity to enjoy the unique culture and traditions of the country and immerse myself in life on another continent.

I applied for the placement under Rise, the worldwide programme of the DAAD e.V., very early. I was able to choose from three programmes. As I was more concerned with the research areas offered than with possible locations, in the end I had found possible placements all over the world. My interests ranged from Australia via England all the way to America. In February, I received confirmation for a placement in the USA and was even funded by the Knapp scholarship of the DAAD-Stiftung. Now it was time to establish contact with the supervisor in the foreign country. This went off without a hitch, and we established a very informal tone right away, as is customary in the US.

What came next I had thus far only heard about in stories told by friends. The paperwork. For a stay in the USA, I needed a J1 visa. This requires a lot of forms. Luckily, my supervisor on site and his administrative assistant helped me a lot with obtaining the DS2019 form, which is absolutely mandatory. In order to be issued this document, I had to obtain all of the documents listed on the website of the American embassy. The lively email exchange with the American university helped me immensely to get it done. When after some time I finally had the DS-2019 in my hands, I still had to pay the SEVIS fee and make an appointment at the American Consulate in Frankfurt. This didn’t take very long and I was offered several dates to choose from. At the consulate, I didn’t have to wait very long. After half an hour, all the formalities were finally done. One week later, my passport with the visa glued in arrived in the post.

I had booked the flight to the USA even before I had received the visa, because ticket prices were steadily increasing. Contrary to expectations, I found a relatively affordable price at a travel agency and bought the ticket immediately. I also booked additional flights within the country before my departure. For instance, I flew to Los Angeles one weekend and to Oklahoma City another weekend in order to use my free time to make more memories in this vast country. I was very lucky with finding housing. My supervisor knows a couple who rents out rooms, and I was able to live there. I had my own bathroom and shared the kitchen and living room with my very kind hosts. I had some temporary housemates, and there were also three dogs in the home. I am still in contact with my Brazilian housemate.

San Antonio is a typical Texan-American city, so the cultural opportunities were very diverse. Sweet American food meets spicy Mexican cuisine, and all signs are in English and Spanish. One thing that is the same everywhere is the hilly landscape and sultry air, two factors that make the city unsuitable for walking and cycling. Pavements end abruptly and the distances within the city are great, which is why practically everyone owns a car. Since purchasing a car for three months would not have been worthwhile, I decided to buy an affordable bicycle at Walmart to ride to the university every day. Fortunately, I met a lot of nice people who were glad to take me shopping and show me around San Antonio in their cars. Once I took the bus to get to the city centre. Unfortunately, public transport infrastructure is very poor. Very few places can be reached by bus, and distances that would take 20 minutes by car can easily take an hour and a half by bus. San Antonio summers are humid and very hot (up to 40 °C). Especially the months of July and August were very exhausting for me, and I was glad that every building had air conditioning. This made work at the lab and life at home much more bearable. In September, the rainy season started a bit early.

The food was sweet and greasy. I particularly missed real German bread with a crunchy crust and healthy seeds. I tried to buy as many fruits and vegetables as possible, which was not too expensive. Prepared foods and meat, on the other hand, were rather overpriced. Also, I went out to eat in restaurants quite often, which is common in America. I had to be careful, though. If I thought the price on the menu was not too expensive, I had to remember to add sales tax and usually a 15–20% tip. Since I wanted to know what the country looks like outside of San Antonio, I took a lot of weekend trips. During the first few weeks this was somewhat difficult, because I knew very few people, but over time it got easier. For instance, I visited the zoo and aquarium in San Antonio with a colleague, saw a food market with different Mexican delicacies and visited the shopping centres. I also had a chance to visit the formerly German cities of Fredricksburg and New Braunfels, which are somewhat smaller than San Antonio. There I did find some things that resembled German baked goods like Streusel and Berliner. My furthest trips went to Los Angeles and Oklahoma, as well as Corpus Christi and Houston. Those cities were very different from my host city. In LA, for example, the distances were not as great and there were actually pedestrians. Also, everything was very close together and you could not see the sky for all the skyscrapers. While in San Antonio, I did not notice such great differences between the social classes, in LA I could sometimes clearly tell rich from poor. Of course, I captured all the great experiences I gathered and the many wonderful people I met on camera.

It was especially important to me to be given the opportunity to have this experience, both the academic and the social aspect, in a foreign country. I want to express my sincere thanks to the DAAD-Stiftung and Dr. Knapp for providing this excellent opportunity and for the wonderful support that made this experience possible.

As of fall 2018. The German version is the original.