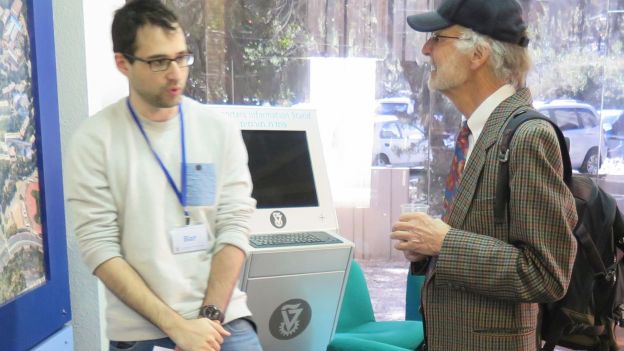 Dr. Winkler and one of his scholarship holders in expert discussion at the Technion in Haifa.

"For me it was about giving something back that I myself received so abundantly. The DAAD-Stiftung is helping me to do that.“

Vividly Dr. Winkler explains his motivation for supporting the DAAD-Stiftung

The start of diplomatic relations between Israel and West Germany in 1965 didn’t leave a lasting impression on me back then. Yet fifty years later I have decided to support the academic relations between both countries by financing language course scholarships for two Israeli students each year.
Why?
In the mid-1950s, I was young apprentice in a machine factory in southern Germany. We were building gigantic motors which were to be installed in Israeli ships. Following talks with the Israeli prime minister Ben-Gurion, the German government under Konrad Adenauer offered Israel favourable conditions to help build up its shipping fleet. The workers at my factory had differing opinions on the matter, but nobody discussed it openly at the time. And I myself had neither historical knowledge nor political awareness.
Ten years later, I had more pressing concerns than to worry about the situation between Israel and my home country.
I was finishing up my engineering programme in Munich; I only had to write my thesis. The year before, in summer 1964, I’d spent three months in England – half the time in a language course and the other half completing an internship in a factory for luxury limousines. Now in 1965, I was looking forward to a new foreign experience – this time in France.
I had the hardest time financing my stay abroad. I had to do it all on my own, but the effort was worth it. Both of these visits to foreign countries decisively influenced my path in life both professionally and privately, as they paved the way for my future professional activities abroad.
After an eventful and successful career, I took on a new task in 2015. With more money than time to spend it – metaphorically speaking – I thought about how I could help ambitious young people become acquainted with a foreign language in a foreign country, namely my own, with an unknown culture, but with similar basic values. It was important to me to enable young students to gain this experience and ensure that money didn’t pose an insurmountable obstacle.
What I found most difficult was deciding what country the language course participants should come from. I couldn’t choose the countries I myself had visited long ago. Not because I didn’t owe them my gratitude, but because they are among the wealthiest countries. After further consideration, I hit upon Israel which possesses great power and courage, but is constantly threatened from outside. An equal partner, but one that also depends on the help of others. I don’t wish to conceal the fact that there are also personal reasons for wanting to support the “Jewish state” (as Theodor Herzl calls it in his book of the same name).
As for the disciplinary focus of “my” scholarship recipients, it made sense – as an engineer – to offer preferential support to STEM students. After all this was decided, I only had to find the “driving belt”.
Considering that the DAAD had helped finance my foreign visits for years, it would seem an obvious decision. But at first I thought about starting my own foundation. But I didn’t have close to enough capital to do that. Finally I arrived at the DAAD-Stiftung which was able to use my donation to finance two language scholarships per year through the DAAD.
Everything happened quickly after that. Within a period of weeks, we concluded the agreement. Soon thereafter, two outstanding candidates were selected to receive the first Dr. Gustav Winkler Scholarships, and I had the pleasure of meeting one of the students in Israel, and the other I’ll be meeting this summer in Germany.
To sum up, thanks to the efficient all-women team at the DAAD-Stiftung, the DAAD and its network, everything worked out fine and all of my wishes for establishing my own personally-financed scholarship have been fulfilled.
I wish to emphasise that I do not see my contribution as a kind of reparation like Konrad Adenauer’s, which in my view is something that can never be compensated, nor is it a “repayment” to the DAAD, where nothing must ever be repaid.
I am simply trying, with the help of the DAAD, to give back a little of what I have received so abundantly. May many other people feel the same way.