Why I support the DAAD-Stiftung 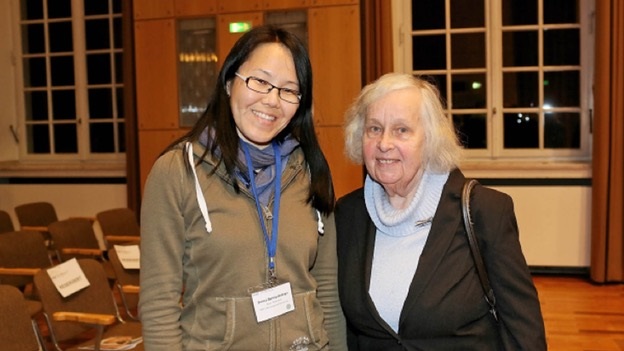 Prof. Johansen with one her scholarship recipients.

Professor Dr. Ulla C. Johansen established the Ulla Johansen Scholarship in 2012. The six-month research scholarship is awarded to young researchers to help them advance their academic pursuits and allow them to gain intercultural experience in Germany. The Ulla Johansen Scholarship is primarily intended for doctoral students conducting research in subjects related to music, social sciences, language studies, history or ethnology.

“Studying other cultures and their established customs is very important to me – and not only because of my professional history as an ethnologist. That’s why I’m pleased that with the DAAD-Stiftung I can help researchers from Yakutia gain experience in Germany by way of a DAAD scholarship. It provided me with far-reaching insights into how people think and feel in a different culture and brought me life-long friendships.”

HOW I BECAME A DAAD-STIFTUNG SCHOLARSHIP DONOR

I was born in 1927. At the time I went to school, the greatest fulfilment in life for a woman was to marry and have as many children as possible. Those who didn’t succeed were pitied and condescendingly called “old maids” – even if they had a successful career. The Second World War changed this attitude in society completely. The demographic pyramid in Germany at the beginning of the 1950s shows that society was missing almost one quarter of its young men born between 1922 and 1927 who were practically children when they lost their lives. The young women, who remained behind, could no longer achieve the life plans that society had set for them after such experiences. I considered myself one of them, but the enthusiasm for my science, ethnology, helped me overcome the sadness I felt for a long time for not achieving those deeply engrained social goals. Not only did the excitement of gaining new scientific findings fan my enthusiasm more, but also a 15-month DAAD scholarship to study and research in Turkey. It provided me with far-reaching insights into how people think and feel in a different culture and brought me life-long friendships.

I was in my mid-forties and had gotten along well without a husband. But what about children? Was I never to experience the joys of family life surrounded by children, as I had known so well growing up? Bringing a child into the world as a single mother, a child who wouldn’t have a family – I didn’t think that was responsible. The same went for adopting a baby. There were several dozen couples vying for every baby put up for adoption, two parents who could offer the child a whole family. Of course, there were some children who were already older and came from difficult family backgrounds. It was hard finding new homes for them because they had suffered lasting damage in their first years of life and were likely to have psychological problems for a long time. Offering such a child a home and a loving mother wouldn’t have only met my egotistical needs, but the child wouldn’t have had a better chance elsewhere.

That's how I met Ralf: six years old and overweight because eating gave him comfort. He wore thick glasses and had several scars from physical abuse he suffered in his first years. In the beginning, there was a slight smell of excrement about him because he hadn’t received proper training in cleanliness. He didn’t speak, although he clearly understood most of what was said, and he avoided adults. But with me, he made an exception. He took my hand and listened intently when I tried striking up a conversation with him. The supervisor and head psychologist of the orphanage, to which he was sent after his Turkish father and later his German mother abandoned him, allowed me to take him on weekends and eventually a large part of the summer holiday. After three-quarters of a year, I adopted him, and two years later, Ralf had compensated for many of his deficits. Like a half-wilted little plant that needs to be watered and fertilised regularly in order to blossom again, Ralf constantly needed reassuring that we would stay together forever, that I loved no other child more than he, gave him kisses good-night and hugs and cuddles all the time. At first he only parroted what I said, but after a while he developed a rich vocabulary. Bike riding, swimming and hiking helped reduce his weight and his problems with hygiene, which particularly lowered his self-esteem, were solved after two years of training. He turned out to be very warm-hearted and also artistically talented. After ten years of schooling, Ralf completed his education, although his stunted development in early childhood caused him to suffer from dyscalculia, which wasn’t called that at the time and which most people thought was simply stupidity.

That was when I had to find a suitable flat for both of us. And when he reached adulthood, I also purchased an apartment for him so that by supporting him through my salary and the money he earned through regular work, he could live there by himself – or perhaps with a family of his own someday without having to pay rent after I passed away. But things turned out differently: Ralf died before he reached the age of 31. Who was to benefit from the financial security I had arranged? What was I supposed to do with the rental income? My pension gave me enough to live on, and future research visits and trips to conventions are generally paid through public funding. I don’t wear fur coats for reasons of animal protection, and going to expensive beauty farms can’t help me anymore. But what makes me especially happy is when I can play a part – even from a distance – in providing colleagues at a young and especially receptive age as I was back in 1956/57 the chance to become familiar with life in a different culture, how people think and feel in everyday life while at the same time gaining further professional qualification. The DAAD-Stiftung is helping me do that by awarding scholarships funded by the rental income from the apartment once promised to my now deceased son.

Note from the staff of the DAAD-Stiftung: We wish to express our heartfelt thanks to Ms. Johansen for the trust she has placed in us and appreciate that she has so openly shared her impressive and emotional personal story and feelings.