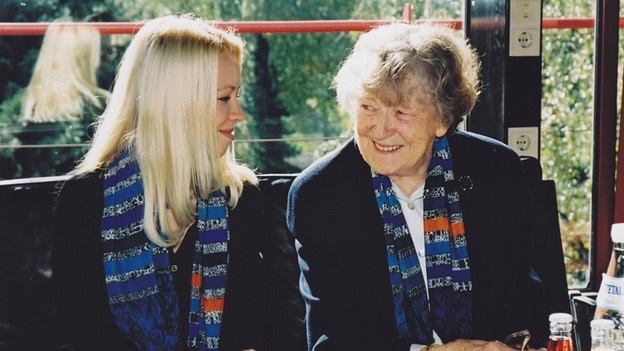 The first Ilse Müller-Scholarship beneficiery met with her sponsor on 10 October 2000 in Bonn.

Originally from Lower Silesia, Ilse Müller donated a endowment to the DAAD-Stiftung in 1999, laying the foundation for future scholarships which have supported numerous talented students since. The committed European explained her reason for making such a generous donation as follows: “My home country has been Europe since 1946. Learning languages promotes European thinking and feeling the most. That’s why I would like to enable young people to study in Germany, in particular students majoring in German Studies.” And there is a clear connection between the former translator’s goal and her personal history. Due to her strong attachment to her native region now located in Poland, she would like to give young Poles the opportunity to study German Studies for one semester at a German university.

Ilse Müller awarded her first DAAD-Stiftung scholarship to a student in 2000. At their first meeting, the Polish student and her sponsor discovered they had something in common. The scholarship holder graduated from the Olawa (Ohlau) High School where Ilse Müller’s grandfather had once served as headmaster.

In 2009, the DAAD regional office in Warsaw hosted a meeting of Ilse Müller Scholarship alumni in Poland. Ilse Müller attended the event in Warsaw and was delighted to see four of her former beneficiaries again.

DAAD's regional office in Warsaw provides particular information on the Ilse Müller-Scholarship on their website.