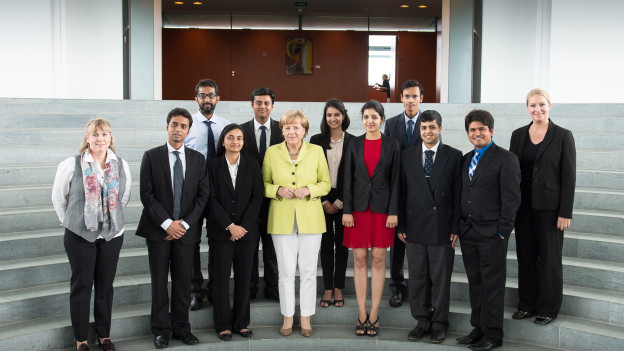 In August 2014, nine Indian master’s students of European Studies had the opportunity to meet with German Chancellor Dr. Angela Merkel at a photo shoot at the Chancellery in Berlin. After receiving the “Jawaharlal Nehru Award for International Understanding”, the Federal Chancellor donated the prize money to the DAAD-Stiftung. The donation is being  used to create a new scholarship to enable young Indian students to study in Germany.

The Chancellor arrived on time for the photo opportunity. After the photo was taken, she spoke to the scholarship recipients first in German and then in English. Everyone was impressed by the Chancellor’s friendly and relaxed manner. She wished the group a nice time in Germany. She also expressed her wish that the young Indians would maintain their ties to Germany during their professional careers in the future.

After she took her leave, the group was invited to participate in a discussion on current political issues with a staff member from the department of foreign affairs and security policy. This was followed by a guided tour through the Chancellery, where the students were allowed to visit the press room and the conference hall. The view of the Berlin skyline from the visitors’ balcony atop the Chancellery concluded the tour which offered fascinating insights and a wealth of information.

The meeting was documented in the weekly video blog “The Chancellor’s Week” posted by the Federal Press Office.